Note: This came from an old magician’s estate. Supplied with Supreme Magic’s original six pages of detailed operating instructions. We played around with this and after a little bit of handling found we could get the rope to remain rigid and do as instructed. It will take a bit of practice and experimentation on your part to get what works best for you. Just be aware that the entire rope does not become rigid, just around one foot or so.

As stated on the Supreme Magic instructions: Here’s an Indian Rope Trick that is the last word in simplicity and yet which is near to real magic, natural magic than any other similar effect ever offered!

The piece of rope used in the performance of this outstanding mystery can be passed out to a member of the audience who can have a look at it, there is no concealed mechanism; there are no projections to the rope, the magician shows how to magically tie knots to the rope and how to magically make them disappear! The audience will give the magician credit for skill, yet the effect is only just beginning.

The magician strokes the rope and to the amazement of the audience it remains rigid, standing up from his fingers. He asks for volunteers to climb the rope but as none were forthcoming he blows on it and it suddenly wilts and falls over! Immediately the rope is shown to be soft and supple once again.

The trick is really astonishing, because nothing is used except the rope. There are no hidden gimmicks, no magnets, no wires, no little pieces of wood. None of the usual principles are used.

A clever effect that will baffle and astound, even magicians. 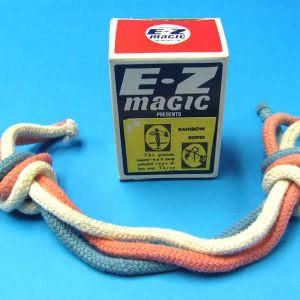 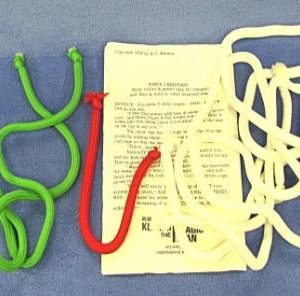