This came from an old magician’s estate. No instructions.

When we first acquired this we didn’t know what it was but after playing around with it we realized it was a jumbo version of the close-up Mental Die effect. But instead of being constructed from brass this is made from heavy cardboard.

These different positions will not be noticeable to the spectators but by holding the box behind your back you can easily tell what position the lid is in related to the box. And once you have learned which set of numbers on the die create the different positions you will have the information you need to know so as to able to discern which one of the two possible numbers were chosen.

How you proceed from there and reveal the selected number is up to you.

Note: The box measures 5.5 inches per side while the die (because of its construction) measures differently on its sides. 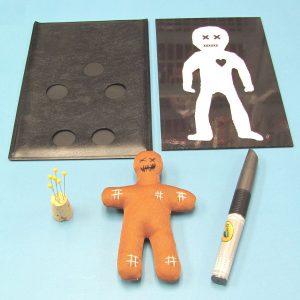