What you see pictured all came from the same old magician’s estate purchase. It’s a lot of different coin magic related pieces, some of which we are familiar with and others we are not. We will try and describe what you’re looking at. We assume a number of these pieces came from other tricks which were lost from the previous owner. Most of what you see are just bits and pieces that can be used to make up your own tricks or replace some missing or damaged pieces from some tricks you may already own.

The top row of four coins are all non-expanded shells. The nickel appears to also be cut down and was probably from a nesting coin effect like the “21 Cent Trick”, but that’s only a guess. The two middle coins are English with no magnetic attraction as is the American dollar coin which we believe was a squirt coin that was taken apart.

The second row consists of two non-gimmicked brass Chinese coins and a brass Okito Box. The smaller Chinese coin measures about 7/8 of an inch in diameter and is fairly thin. The larger Chinese coin measures 1-1/4 inches in diameter and is the thickness of a half dollar. The Okito Box has some nicks on its edge probably due to the previous owner hitting the box with a coin to prove it solid. The box will hold half dollar size coins.

The third row consists of two Jefferson nickel non-expanded shell coins that have a steel insert so they can be picked up with a magnet. We believe these came from an old Adams’ Magic “Nickel to Penny to Dime” trick. To the right of the two nickels are two brand new (still sealed in the original plastic shrink-wrap) brass coin box lids. Not sure if these came from a nesting box set. The larger lid measures 1-1/4 inches in diameter and the smaller lid measures 1-1/8 inches in diameter.

The fourth row has three non-expanded penny shell coins with steel inserts so they can be picked up with a magnet. Adams’ magic tricks used this type of penny in a few different effects like “Nickel to Penny to Dime”, “Magical Coin Block”, etc. The fourth item is a copper penny-size blank on both sides, and the last coin is a penny with two holes. What this was used for we do not know. 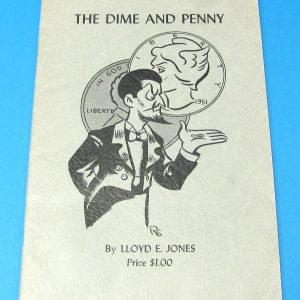 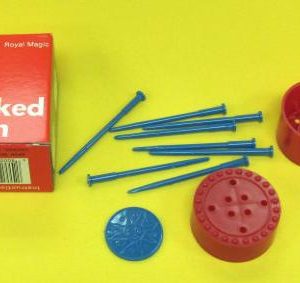 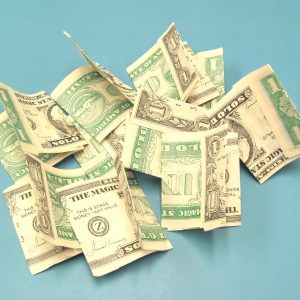