A vintage five page manuscript describing the works for a ghost routine on stage.

Occasionally magicians ask for a ghost show routine to compliment their regular program; one that is rather simple to perform and yet supplies a ghostly atmosphere on any darkened stage. The following routine devised and audience tested by Syl Reilly leaves nothing to be desired.

Effect: Slowly the main curtain opens on a fully lighted stage. Performer enters and while making a few remarks relating to spirits and ghosts the lights slowly fade out and in total darkness only his face is seen in an eerie green light. At the conclusion of an opening speech his face vanishes and a large luminous bell slowly wends its way across the stage, ringing as it goes, apparently calling departed spirits to a party.

Suddenly four large ugly heads appear, one at a time, and weirdly float about the stage, up and down then vanish into thin air one at a time.

Two human size ghosts appear and float about the stage making many strange gyrations, then vanish.

Loud clanging and banging noises come from out of the darkness as two phantom streamers appear and fly out over the audience creating screams and laughter. They dart here and there with lightning rapidity. At the same time many in the audience will get the feeling of a mysterious rain descending upon them. Suddenly the phantom streamers vanish and the noise fades away.

A terrifying haunch back MONSTER comes out of nowhere into the center of the stage and slowly wanders about. Consternation reigns as this horrible person moves toward the audience. The performer steps on stage at this point and loudly shouts STOP, but the beast keeps coming. Performer draws a pistol and shoots the MONSTER who is seen to crumble arid vanish into space, in a puff of smoke.

The bell slowly returns across· the stage, ringing as it goes, saying the spook party is over.

As the bell goes behind the scenes the curtain is quickly closed and the lights come up slowly. 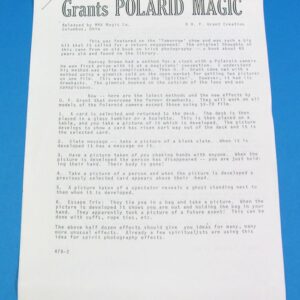