You are here: Home / Cards - Tricks and Routines / Back To Back (Mark Mason)

Back To Back (Mark Mason)

A card is freely selected from the blue deck, looked at and remembered, and then lost back in the pack as the cards are shuffled. The performer says that he will invisibly palm the chosen card from the deck and place it between the two red backed cards resting on the table.

Now the blue backed card is caused to visibly jump from the middle of the two red cards and appear at the bottom of the packet! When the blue card is turned over it proves to really be the selected card!

You receive the two special Bicycle poker-size gimmicks and routine which includes an alternative handling for the routine described above plus you receive one additional different routine.

Some card handling is required to perform these routines properly and are not for the beginner. 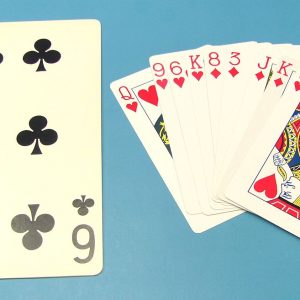