Comedy Bits & Magic Routines #1 with Harry Allen For over 30 years, Harry Allen has been one of America’s most popular magicians, comedians and magic dealers. His comedy books have been best sellers, his original magic effects have been published and marketed all over the world, and his lectures have been received enthusiastically by magicians everywhere.

Sixteen effects described including some of the following:

Sawing a Woman in Half – The hottest Four Ace trick you’ve ever seen. A freely selected card appears in a most visual way.

Matrix – Four coins assemble themselves under one card under impossible conditions. This is a real nice mix of coin and card magic.

Blanco – Blank faced cards one at a time change into normal playing cards.

Rare Coin Penetration – A ping-pong ball, coin, and silk are put into a clear glass tumbler, showing it to be solid. The silk and coin penetrate the bottom of the glass at the same time.

Melting Mirror – A beautiful solid mirror enables a silk to penetrate from the front to the back while showing the mirror to be solid.

Spoon Spinner – Two spoons attach themselves to each other. The bottom spoon rotates right in front of your eyes. Both spoons can then be handed out as they turn back to normal spoons.

Joker Message – A selected card comically vanishes from the deck and reappears in the card box, which has been in plain view the whole time.

China Change – If you blink, you will miss it! A half dollar changes into a Chinese coin in the blink of an eye.

Money Cups – A Three-Card Monte done with money and cups and an unbelievable surprise ending.

R/B Coin Deck – Scotch & Soda – If there was ever a classic in magic, this is it!

Plus six other great routines.

This is a Pre-Owned DVD and is priced accordingly. 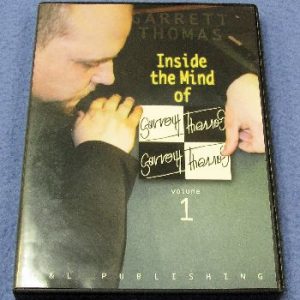 Inside The Mind Of Garrett Thomas – Volume 1 – DVD 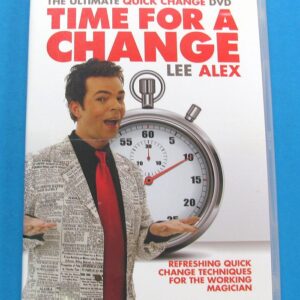 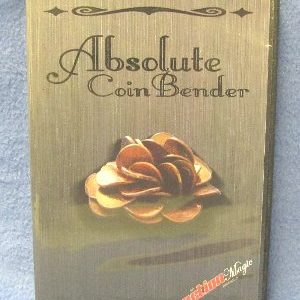