You are here: Home / Close Up Magic / Brass Coin Safe

A brass box is displayed . This has a hole in the cover, and inside the box are a number of coins. A spectator is asked to remove the coins, but is unable to do so. The cover revolves freely on the box, but cannot be removed, unless you know the clever secret.

The box will hold coins of any size including old English Pennies, or U.S. Half Dollar coins, etc. If you do not wish to have the coins pre-loaded into the box, you could borrow a coin from a spectator, have them mark it with a marker and then introduce it into the box and have them try to remove it.

You could also use other objects, such as a finger ring, earring, a die, folded bill, etc, or any item small enough to fit into the box, but not so tiny that it can be introduced or removed through the hole in the cover.

The box is designed working on the principle of the Zulu Puzzle Box described by Professor Hoffman In his book PUZZLES OLD AND NEW ( originally published In 1893 and republished in 1988 by Martin Breese). The precision machined brass box supplied is a superbly constructed long lasting and durable prop.

You’ll marvel at the ingenious method employed to open the box.

They’ll never figure it out! 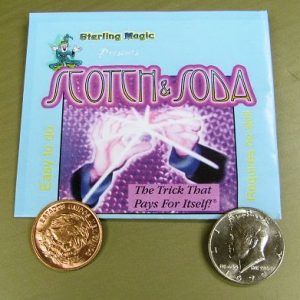 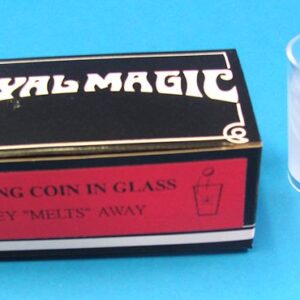 Vanishing Quarter In Glass Of Water