You are here: Home / Cards - Tricks and Routines / Peki Card Watch (All Metal) Ace of Spades

This came from an old magician’s estate. Good working order and in like-new condition. No original instructions but we will include some from another watch effect that has the identical workings.

Have a spectator select a card, then concentrate on the image of it in their mind.

Pull back your sleeve to show an all metal wristwatch with a black face. Take the watch off your wrist and give it to another spectator to hold. The spectator is told to stare into the watch’s face, pretending it is a crystal ball, and see if they can visualize the name of the thought-of card.

Unknown to everyone else in the audience the watch mysteriously causes a miniature playing card to materialize behind the crystal. It is the selected card. As the spectator announces the name of the thought of card the image slowly vanishes from the face of the watch.

To the spectators watching it appears to be an impossible effect where one spectator apparently reads the mind of another.

The “Peki Card Watch” is so unexpected, so impossible seeming, that the spectator will just remember thinking of a card and then being told what they are thinking.

The “Peki Card Watch” includes the specially manufactured all metal wristwatch with metal band and some written instructions. 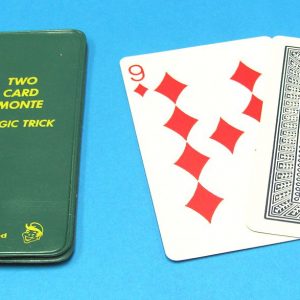